Today was fun, I got up with a bit of a fever not as much as yesterday, but I was not achy.  We did the presents, Eric was not as excited as we were when he got his game chair, but he really does love it.  I have to remind myself even though he is my little boy he is 22, so the jumping up and down in excitement is probably over, but he did make sure that everyone went and checked out his chair.

Jeff loved his new Mossy Oak seat covers and steering wheel cover that the girls and Toby got him, he did jump up and down in excitement so maybe not all is lost with Eric...ha! just kidding, but he did go right outside and put them in the truck.  Jeff got me this beautiful Tiffany style desk lamp with a dragon fly on it. We usually don't exchange gifts because we really have all we need, so this year was fun, that we both did it. Toby got a new toy and has already managed to chew off the tail. When I got Toby the toy I was also shopping for more doggie diapers and instead I found a male wrap, and that is an amazing little thing with velcro, that just covers the "leaker" I just put that on him (he doesn't particularly like it) and now he could hang out with everyone all day, and we didn't have to worry about any excitement pee.

Jeff's brother Tim, and his sister Patty, her hubby Bob, daughter Emma and mother in law Virginia came over I took a nap before everyone got here and other then sneezing and being full of snot...ha..ugh...I felt fine.  We had tons of food, and actually we timed it perfectly by the time Patty got here we were ready to eat. I wanted to show this beautiful card I got from Penny Mull, I love how she did the sky and how she did the shadow on the snow. I remember treking up the hill as a kid, the snow crunching under my feet with that plastic sled and zipping down the hill. Such fun, but sure glad we don't have to mess with snow now.

Stamp sets used in the card are: Lovely as a Tree, Welcome Christmas & Branch Out.

A few people asked what sets that Tracy's card used the other day and that was A Wish for Peace and I am not sure about the sleigh one cause it is retired.

Ok so you all know that my favorite band is Ryan Shupe & the RubberBand, I have a little crush on Craig Miner, he plays the banjo (as well as other instruments), here is a cute video of Ryan and Craig doing Zumba and it is so funny cause Craig just looks to be dancing, at least Ryan is doing the hand motions. At least I don't have to worry about them quitting their day jobs and teaching Zumba...ha!  Enjoy...

I'm gonna sign off for now and go to bed early. I hope you all had a beautiful Christmas and if you are a fellow Canadian have a fun Boxing Day.

Well I wanted to post a really cute Christmas card for you, but seems like Santa may have brought me the flu.

We did go to True Grit, and it was pretty good, I fell asleep a couple times, I do want to see the original so I can compare them.

Now I am home and achy and just want to go to bed, but I have too much to do for tomorrow.

Will try to find something on the computer to post for tomorrow.

Big hugs to all, 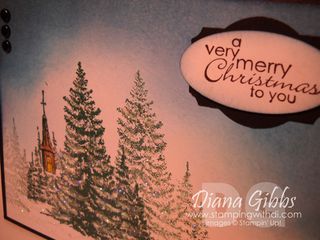 As I look around I am thinking, what did I do today? I was busy all day but didn't get any stamping done. I did dishes, I did lots of paperwork, I am such a horrible procrastinator in balancing the check books, I need to not be like that, and that will have to be one of the things I make a new years resolution about. That took me hours to do, and I don't look forward to getting all my tax papers together either, but that too I need to make sure to do as soon as January gets here and not wait.

I took a power nap today, and it felt good, my power naps are like an hour or more long, so that might be a power sleep, but anyway, I needed it.

When I got up Jeff was home from work and I had a stack of mail on the counter, Christmas cards, swap cards, and a box from my BFF Tracy.

I wanted to share the gorgeous Christmas card that was inside. 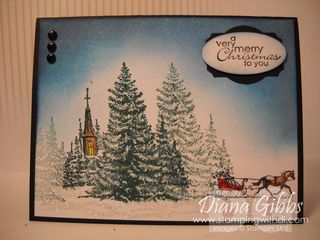 These two sets look super together, and look at that beautiful sky. 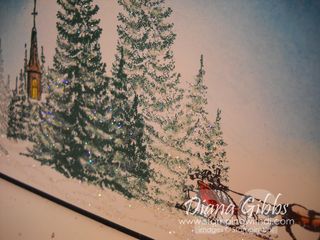 Look at all that dazzling diamonds snow.  That is as close to snow as I want to get.

So Jeff has been talking about the remake of True Grit since he started seeing previews, he has tomorrow off so we are going to go see it.  I had wanted to watch the original first to jog my memory even though Jeff keeps quoting lingo from the movie, but it is hard to find. I did find it in Blue Ray but we don't have that machine.  I will look online and get it somewhere after Christmas, I am sure with the remake they will re-print it.

Have an awesome Friday, Christmas eve day.  Thanks for stopping in! 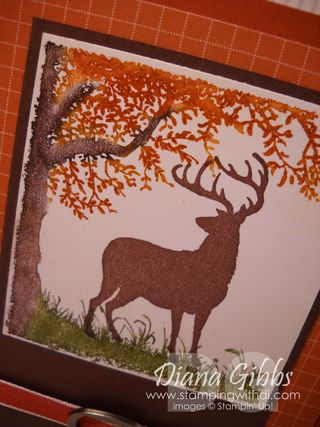 The other day I mentioned Jayne's Cheese Bread and several of you emailed me to ask for the recipe. I checked with Chef Jayne and she said sure I could share the recipe on my blog. It is so good, and heck we'll go on a diet after the new year. My sister Jax said "it's not the food we eat between Christmas and New Years we should be concerned about, it's the food we eat between New Years and Christmas we should worry about".

1 1/2 cups Best Foods or Hellman's mayo (this is a must, do not use miracle whip)

Mix all these ingredients together.

Cut a loaf of french bread in half length wise (you know those ones the grocery store has all ready cooked to buy, usually in a brown bag here in AZ). Spoon the cheese mixture onto the french bread and you will kinda push it into the bread a bit, cause there is a lot of cheese mixture. When that is done on both pieces, sprinkle some paprika and pepper over top.

Bake in your preheated 350 degree oven for 20 minutes, I put it on a cookie sheet to bake.

So Jayne and her cutie patootie forever changing his looks hubby Bill gave Jeff a loaf of Jayne's Cheese Bread for his birthday, we said no gifts, but he still got such nice things, from all our great friends. Anyway, Jayne made the nicest card to go with it. 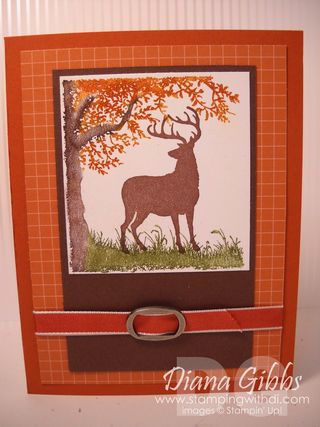 Isn't that an amazing masculine card? I love how she used the marker to ink up the stamp so she got all those colors happening.

Let me know if you make the bread, I'll pass it on to Jayne.

I just saw a preview for the Bachelor, I don't watch that show, but does that girl really have fangs? I might have to watch it to see. Now to remember when it comes on...ha!

Well I have the CMA Christmas show on and it is making me tear up with the songs for the soldiers, so I am gonna sign off and say see you tomorrow.

Have an awesome Thursday and thanks for stopping in. 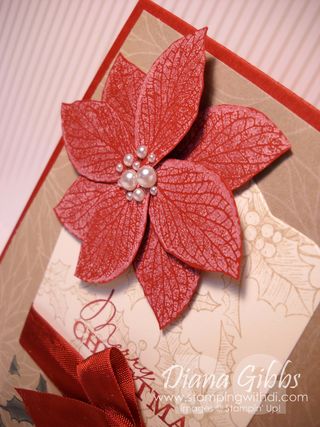 My nerves must be acting up and I don't know about it. I got a freaking cold sore coming. I hope I have nibbed it in the bud, I have been putting medicine on it and also have been taking lysine.  Ugh! I hate them, it has probably been a year since I got one. I thought for sure I would have got one before Convention. So I guess I should be thankful that it has come now and hopefully it will be all cleared up before Leadership in January. I just keep telling myself slow down, just breath, ha! What sucks is I had a dentist appointment for Wednesday and I called to cancel it, I don't want them messing around in my mouth, plus I don't think they want to be doing it either, I know in the last two days I have seen two people with cold sores, and I think that my body was like hey I haven't had one of those in a while. At least it was just a cleaning, but I hate having to cancel it and I hope the aren't mad.

So as I was driving around the other day, I was like there is nothing sadder then seeing those poor blow up Christmas lawn decorations all flat during the day, it's like they have been killed. There is one on the way to town that is a hunting snowman, he has an orange hunting hat , a vest and a gun. He stays up all the time, maybe the owners think he can defend himself, where as the little penguin is not quite so brave.

I wanted to share with you a beautiful Christmas card and ornament I got from MAMMa. 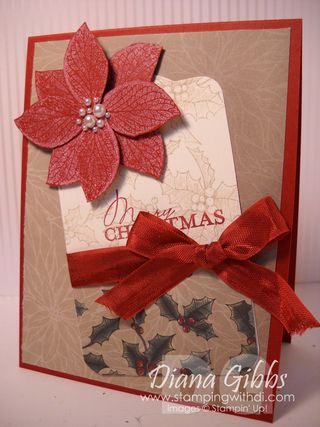 I love how she used the stamp set French Foliage to make the poinsettia, and then adding the pearls in the center.

And look at the cute ornament she made. 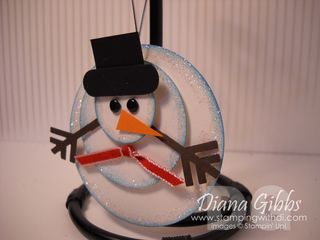 I want to make these so bad. I will have to remember for next year, cause this year is so done.

As I type this Chopped is on the Food network and I am wondering who the heck picks the ingredients that these poor chefs have to cook with. They just used a squab and I am thinking that is pigeon.  Now they have to use cotton candy with a bunch of fruit and stuff. I don't know who I feel worse for, the chefs or the poor people that have to eat it.

OMG! I just saw an ad for a thing called Soda Stream, it makes pop! Years ago when Jeff and I were dating, Jeff's Mum used to make pop all the time when the Schwan man used to sell it. It was so good, in fact she finally only let us have so many, cause she only had so many bottles. I am gonna look into the Soda Stream and see what it is all about. Not that we need to be drinking pop, but boy it sure brings back some great memories.

Well I better hit the hay, it's almost midnight.  I just don't know how the day goes by so fast.

Have an awesome Wednesday and thanks for stopping in!