A Cup of Joe 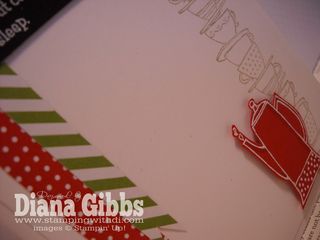 I saw a cute card by Julie Ebersole using non Stampin' Up! stuff, but I loved the layout, and I totally wanted to do it for my stamp club girls this month, so Morning Cup to the rescue.

Usually the local girls come and stamp on their club day, but this month that day fell on the day before we left for Disneyworld so I stamped all the cards for the long distance girls as well as the local, I knew I'd be busy. 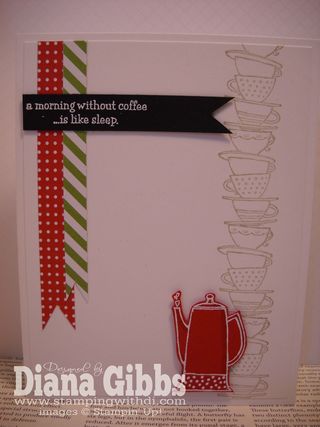 Don't forget today is the last day to order from the Occasions mini catalog.

I'll be checking back with you from time to time.  I'll probably Twitter and Facebook too. Plus I've been dieing to try out the Instagram that Droid finally has an app for my phone.

Have an awesome Monday and thanks for stopping in.

Well kinda one, it was spent mostly getting here but once we did boy it was nice seeing everyone.  I keep asking Eric if he is having fun yet and he says no, cause really the fun won't be till he goes on his first ride. It is nice getting to introduce my friends to Eric and for him to meet them as well.

Here's a few pictures from today, some I used the instagram app on my phone...way cool. 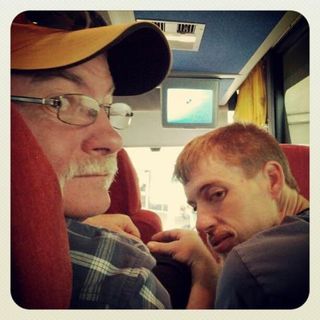 The guys in the shuttle headed to the Boardwalk at Disneyworld. I see lots of Father/Son bonding time on this trip. 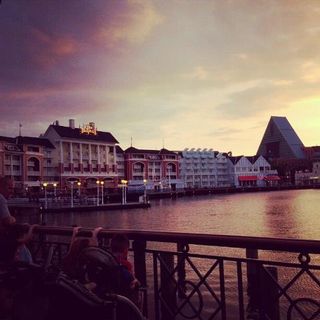 Eating supper (hot dog and fries) at sunset on the Boardwalk. 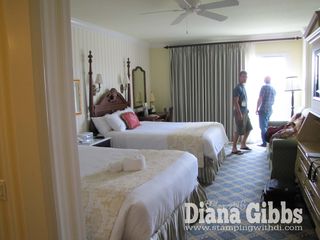 The guys checking out the balcony. 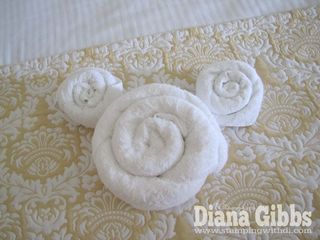 Cute Mickey made out of towels on our bed. 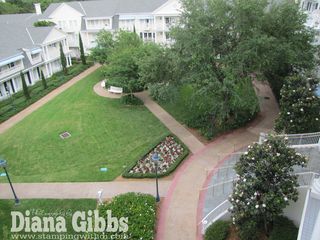 View from our balcony...we didn't realize till tonight that we can watch the fireworks from our balcony, we realized it after the last big one, so hopefully we can catch it another time. They start at nine, so I would think this old gal would be more then ready to be back at the room by then. 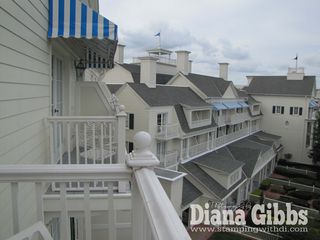 Another view, look how clean it is.  My BFF Tracy says she dares me to find a piece of trash anywhere in the park. 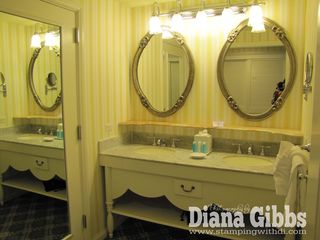 The bathroom vanity, I love the So Saffron striped walls. 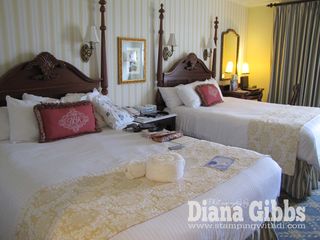 Another shot of the beds.  The guys are trying to sleep right now while I am typing. We are three hours difference, so by the time we are used to it we will be heading home.  We have to get up early tomorrow for breakfast and then a fun show and then we get to watch the characters open the park. Speaking of characters, look at this one eating peanut butter cake.  He didn't want any supper but he was game for dessert, Jeff told him this is the only time he can have dessert without eating his main course...I mean we are at the happiest place on earth after all. 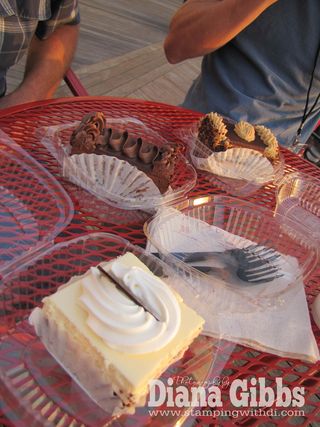 We had headed back to our room, cause we were whooped and we beat our pillow gift, so Jeff answered the door and got it.  It is an adorable bag to keep snacks in...with our name on it...and it looks like Mickey's shorts. 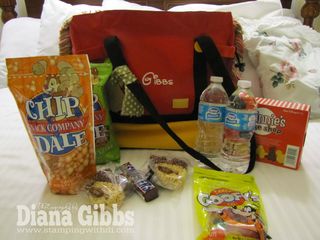 Look at all the fun snacks inside. Yeah!! Thanks Stampin' Up! for everything!

Well that's it, Eric keeps giving me the evil eye with the click clacking of the typing...I keep saying I'm in the office...ha!

Thanks for stopping in! ~Di - on location Disneyworld Orlando Florida 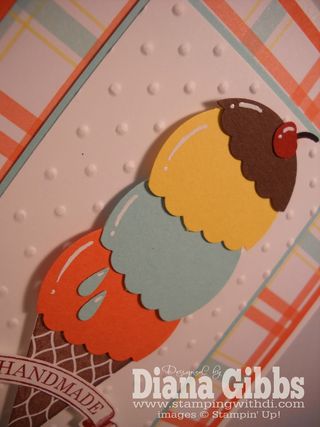 ...is Monday, April 30, so please don't miss out on anything you have been wanting in there.  Also in regards to the Retiring Accessories, those are only available while supplies last.

Remember this tutorial?  The Daisies #2 Die it is retiring, and if you don't have it, you totally need this die, item #114520.  I love it. When ordering don't forget about my Double Country Dozen Rewards.  How would you like to get a free stamp set from the new catalog?  Well now's the time to earn those "eggs".

I joined the organized swap that Stampin' Up! is hosting for the Disneyworld trip and what better card to do than a drippy ice cream cone.  I am sure I'll see a few kids with this happening while we are there...hopefully not my kid...ha! I showed you how easy it was to make the ice cream cone the other day. 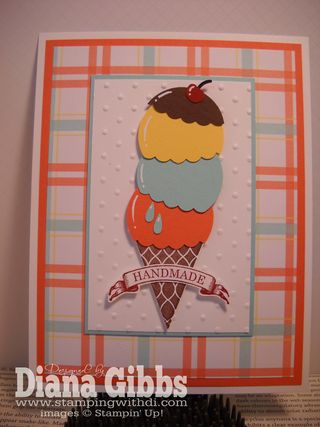 I loved this DSP with the card cause it reminded me of a tablecloth you would use at a picnic.  Don't forget the DSP is retiring, so get it while you can.

Well I still have a bit of packing to do, so I better get off here.

I will be taking my laptop on the trip so I will be able to post while we are there.  I might set a few posts to go automatically in case we are having so much fun I don't get on the computer every day...so much fun? At Disneyworld? Maybe...ha!

Have a blessed Sunday and thanks for stopping in. 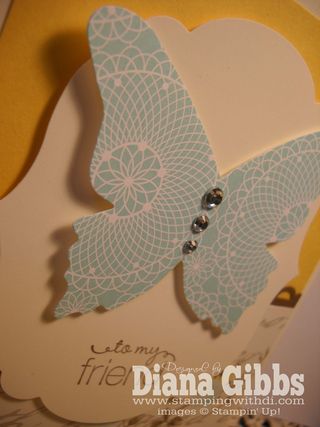 Another card from my 10/10/20 Now & Wow Class. This is the Wow card.  It was actually a card I got from MAMMa I just changed the colors and the DSP. Thanks MAMMa, I love you! 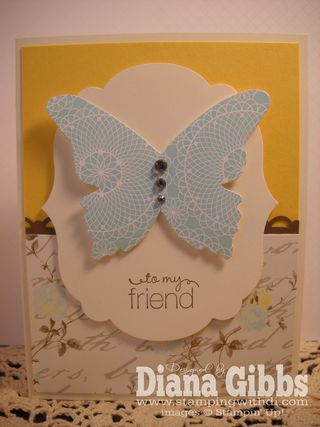 I'm finishing up laundry so I can get all packed up for our trip, plus I am determined to not leave my studio a mess when we leave, so this is a quick post.

Have an awesome Saturday and thanks for stopping in. 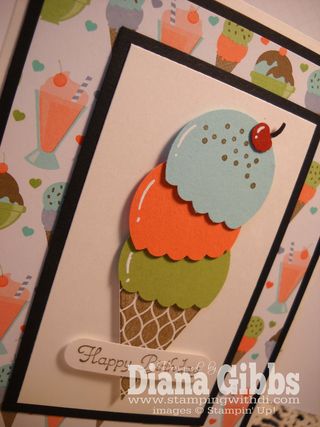 Today I am showing off the Wow card version of the card I showed yesterday.  I also did a video tutorial so you can see how easy it is to make the ice cream cone. So if you didn't watch American Idol make sure you stop reading.

The Queen Experience kicked off the night and were amazing, the lead singer looked a bit like Freddy Mercury but cuter. Loved the real band played with them at the end.  Will have to look for if they are coming to AZ.

It was 15 minutes into the show before they even started picking the Bottom 3.

Elise was the first one, and Jessica was safe. Really? Are you kidding me?

Then Stefano sang (he was on AI last year I think), the song had a great beat and I loved his red sneakers and his back up dancers the soles were red.  I wonder why when a singer is going to dance around they don't wear that head set microphone so their hands are free?

Then Hollie was the second one in the Bottom 3 and Joshua was safe. Ok between these two that was the right choice.

Then Katie Perry sang and I loved her purple hair, too bad I had already had mine colored this week...ha! Jeff said that was interesting, and I said at least they wore sensible clothes, nothing was falling out of their tops and they didn't have to be bleeped once. He said good point...well thanks honey.

Then Skylar went into the Bottom 3 and Philip was safe. Again...really? He has not been well, and I don't think he was even in the Ford video this week. He didn't pick great songs this week. They all need to be smart on that part.

Then they sent Skylar back right away that she was safe and then it was down to Hollie and Elise. Jeff thought it would be Hollie, but she had a better night last night cause of her song choice.  Unfortunately Elise picked not such good songs this week and she went home.  I expect to see an amazing album out of her soon, and Stevie Nicks was impressed by her so who knows maybe they will work on something together.

Well this old gal is headed to bed.

Have an awesome Friday and thanks for stopping in.